Woke up around 4am, scratching my right arm raw… Turned on the lights and theres so much scratches 😦 i basically pulled the towels off and scratched. One moment i couldnt take it and got up to spray apple cider on it. Stung like mad. I slept another 1.5hrs with my raw arm out stretched. Woke up later for work and its the first time since TSW that i dug out my small roll of Tubifast(blue) left to use. Its a tubular bandage. Its quite difficult to stick gauze on my arm and the scratches were a large area. So i decided to use the tubifast. Applied sudocrem to the raw scratches and placed tissue paper on it and wore the tubifast.

Probably my body does not like me eating subway melt yesterday. This morning i had some stomach churns. Poo was yellow and full of undigested stuff. :S

Went to see the gp at my company today about my ears. My left is blocked on and off and right ear is abit painful to press. He said its inflammed and not infected (thankfully!) he said dont go swimming and dont let water get into the ears. Guess i gotta start plugging them with foam ear plugs to stop the ooze.. He wanted to give me ear drops to soothe it. I asked if it contains any steroids, he said might have. I refused it straight away. I asked if it will go away by itself, he said i can monitor for the next few days. So i shall do that. 🙂 also asked for atarax. Wooo! Got 20 tabs, but not like i used it frequently.

What i ate today:

Lunch: fish with black pepper sauce and butter rice and some salad and slice of papaya

Was reading the posts and stuff on the Sg TSW fb group. Kinda depressing to read so much at one go. Got to take it one day at a time. Kinda heart breaking to see mums out their kids through it. Like theres bound to be some pressure and blame? From bystanders.

Today i succumbed to scratching my right thigh. Some scratch wounds sustained. And my arms after shower. More scratch wounds. Been applying lots of sudocrem these few days.

Realise i havent been documenting my symptoms… 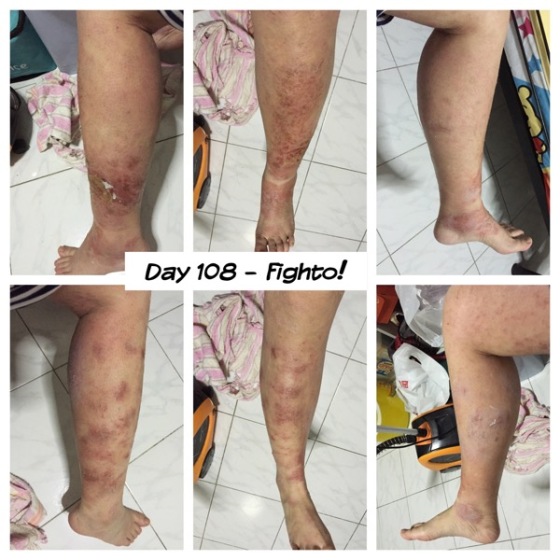 My left arm looks really good from the pic. I hope it continues to look good and hopefully grow stronger to survive any scratching that might come! Right arm gotta recover alittle from last night’s attack.

I was at NTUC fairprice today, heard the elderly couple looking for acv too. The aunties were saying due to US protest, the acv stock was affected, so are other US products. And expect to only have stock at year end?? Wtf so long! Apparently i saw on the website that Braggs is running low on acv too. Sucks that my fav product is low on stock! Been loving acv. Well guess i gotta use tea tree soaks to ward off infections for now.

What is “the mother”? Wiki entry 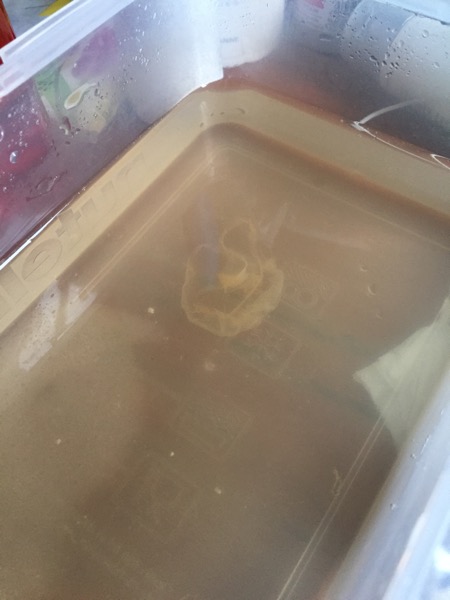 When you pick it up, its a slimy blob:

Supposedly its full of goodness. But i wonder if its okay to eat it :X 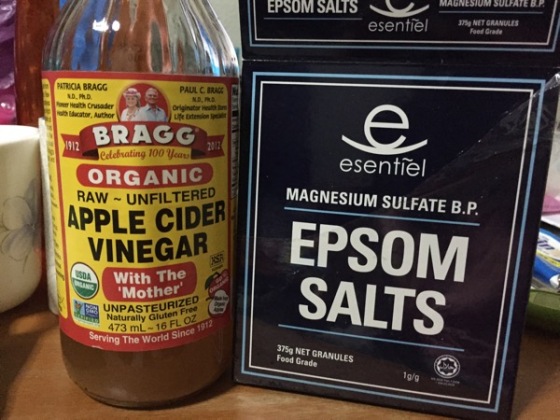 For the past 1 week or so, i am so thankful to be infection free with these items – Bragg ACV and standard Epsom salt

Normally my leg’s patches would swell after afew days, like beginning of a skin infection. But so far the skin has been flat, although red and alittle weepy, they’re manageable as long as they’re not showing signs of infection. Heck, they can weep alittle but im happy as long as they are not infected. 🙂

For my hand soak i put 1 spoon and 2 tablespoons of acv.